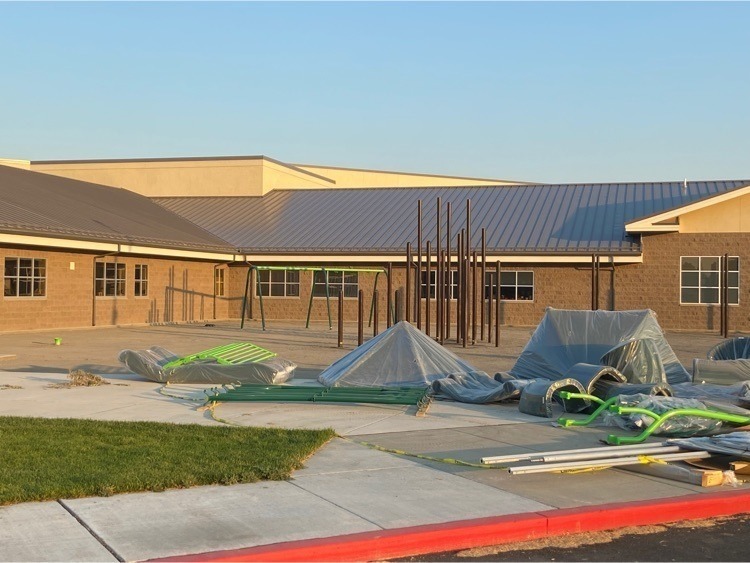 A delay in the Play Structure at Harrah – I realize this will be disappointing news to students and teachers.  The playground equipment at Harrah, has been on sight for several weeks.  The grading of the land has been completed.  The holes have been dug and posts set with cement.  The cement has cured.

The next phase was spreading gravel and tamping it in order to create a secure base under the Poured-in-Place Rubberized Play Surface.  Poured-in-Place is a 2-layer system consisting of a base mat of 100% post-consumer recycled SBR (Styrene Butadiene Rubber) and polyurethane with a top surface consisting of recycled post-industrial EPDM (Ethylene Propylene Diene Monomer) rubber or TPV Granule and aromatic or aliphatic urethane binder.

When the gravel was spread, rather than shovel distribution, a machine was used and the force of the gravel being distributed from the machine damaged the majority of the Powder coated poles that were already installed. Powder Coating is a dry finishing process created by an electric charge that causes a dry powder to fuse to the surface of the metal. This is then baked in a curing oven to achieve a smooth coating.  It is used to create a hard finish that is tougher than conventional paint.  Powder coating finishes can last up to 20 years.

Our options were to: 1) wait and deal with it later, 2) sand and repaint the poles with regular paint, 3) remove the poles and cement, reorder the poles, and replace them with new poles.

When installing a $450,000 play structure, the only option in my mind is to remove the damaged poles, order new poles, and install new poles following all required specifications.  That said… the project is on hold until the new poles are manufactured, delivered, and installed.

The Poured-in-Place cannot be installed if the temperatures are below 50 degrees or above 90 degrees, which means it may not be poured until next Spring.  That said, we are working with the manufacturer and installer to expedite the replacement and reinstallation with the hopes of having this installed before the local weather is not acceptable for installation.